Accurate red primer shades for your prototype and experimental vehicles such as German "E" (Enwicklungsfahrzeuge) series of tanks and assault guns. Other thanÂ that great for railroad carts, cargo containers and installations such as bridges or even simple fire hydrants! This pigment is great for any late war and industrial scenario.

Sort by:
Best sellers Relevance Name, A to Z Name, Z to A Price, low to high Price, high to low
Showing 1-3 of 3 item(s) 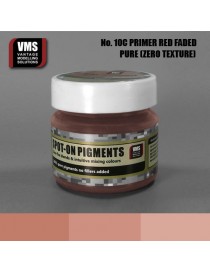